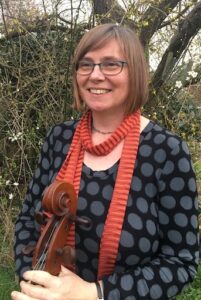 Abby Wollston’s rich experiences of classical, early and contemporary music at the Leicestershire School of Music inspired her eclectic musical interests as a cellist.

After studying at the Royal College of Music and Cambridge University she then chose to focus on the early cello, studying with Anthony Pleeth and Angela East. She went on to perform, tour and record as a baroque cellist with groups such as the King’s Consort and English National Opera.

Training as a music therapist in 2006 sparked an ongoing exploration of multi-media improvisation. She plays with London-based ‘le Collectif International des Improvisateurs’ and has also collaborated with experimental film-makers such as Anna Cady. Since 2019 she has been playing the Nyckelharpa (Keyed Fiddle). This has opened up new musical adventures exploring European Folk Music using cello and nyckelharpa both in duos and as part of ‘Thursday’s Band’.

Abby is a committed music therapist working in Cambridgeshire and West Suffolk.